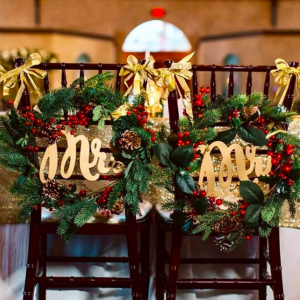 Here’s a short excerpt from Reagan’s Reward, for your Christmas enjoyment:

Reagan giggled as she led him to a nearby loveseat and bid him to sit. She kissed his cheek. “Nothing could dampen this day, not even this snowstorm. The children are home for the holidays, and I’m ready to wed, dearest Daniel. Thank you for waiting so I could have this one season of teaching under me.”

The wind howled fiercely outside the window behind them, and they both turned to look, bumping heads in the process. They laughed at the mishap. Beyond the pane, the white flakes fell steady and strong, evoking a frown from Daniel. “It’s getting worse. I fear your family mightn’t make it to the wedding with all this snow. Should we postpone the service?”

“No! Not another day! All I want for Christmas is you, dearest Daniel Lovitz, and if they can’t make it, I’ll be happy if our wedding is no more than Pastor Mark and us. We can always celebrate with them another time.” Reagan held back the tears that stung the back of her eyes. Their nuptials simply must happen this very night!

Reagan enjoyed every moment of the pampering she received from Mrs. Goodwin, the pastor’s wife, and three other matrons of the church. They fawned over her like doting grandmothers, primping her hair, sharing their stories of wedded bliss, encouraging her as a bride. One woman shared pearl earbobs; another a pearl necklace; yet another her blue handkerchief, intricately embroidered with white hearts and the words, “I will love thee always.”

As Mrs. Perkins thrust the handkerchief into her hands, she planted a kiss on her cheek.

“Something old, something new, something borrowed, something blue. You are the tenth bride to borrow this, and each one has had such good fortune in their marriage. Why, I’ve counted thirty-six babies from these brides thus far.” She winked at Reagan. “And, I’m sure, more to come.”

Reagan’s face grew warm as she thanked her. She thought she’d be alone on this stormy day. But this town had become her home, and these people, her people. In four short months, she’d found more love and support than she’d ever known. Here, in this tiny hamlet of Alexandria Bay, she discovered community. People who cared for and sacrificed for one another. She found love, in the heart of a godly man who shared her faith and loved her deeply. In the eyes of little children eager to learn. In the faces of fellow parishioners and her students’ families as they passed her on the street. In the kindness of the Bernheims in giving them a honeymoon in New York City, where her family would finally be able to meet her beloved.

A gentle knock drew her out of her reverie as Mrs. Goodwin opened the door.

Mr. Goodwin tipped his hat. “Good evening, ladies. The pastor and the groom are awaiting the bride in the ballroom.” The older man tossed Reagan a wink. “See you downstairs.” He gave his wife a peck on the cheek before hurrying down the hallway.

Reagan giggled as she pinched her cheeks. “I’m ready. I am so very ready!”

The other women cackled on their way out of the room, leaving only Reagan and Mrs.

Goodwin. The older woman slipped her arm in the crook of Reagan’s and waved a hand toward the door. “Shall we?”

Reagan sucked in a breath. Finally. Finally, she would become Mrs. Daniel Lovitz!