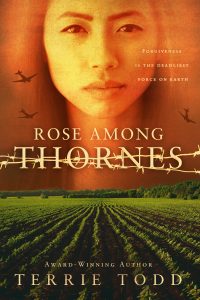 Terrie Todd is the award-winning author of three historical novels and the soon-to-be-released Rose Among Thornes(August) and The Last Piece (November). She’s a playwright, a newspaper columnist, a blogger, and the recipient of the 2018 Janette Oke Award from Inscribe Christian Writers Fellowship. Terrie and her husband Jon are parents of three adults and grandparents to five boys. They live on the Canadian prairies where her novels are set.

War might be raging overseas, but Rose Onishi is on track to fulfill her lifelong goal of becoming a concert pianist. When forced by her government to leave her beloved home in Vancouver and move to the Canadian prairie to work on the Thornes’ sugar beet farm, her dream fades to match the black dirt staining her callused hands. Though the Thorne family is kind, life is unbearably lonely. In hopes that it might win her the chance to play their piano, Rose agrees to write letters to their soldier son.

When Rusty Thorne joins the Canadian Army, he never imagines becoming a Japanese prisoner of war. Inside the camp, the faith his parents instilled is tested like never before. Though he begs God to help him not hate his brutal captors, Rusty can no longer even hear the Japanese language without revulsion. Only his rare letters from home sustain him—especially the brilliant notes from his mother’s charming helper, which the girl signs simply as “Rose.” Will Rusty survive the war only to encounter the Japanese on his own doorstep? Can Rose overcome betrayal and open her heart? Or will the truth destroy the fragile bond their letters created?

What inspired you to write Rose Among Thornes?

For years, I tried to let the idea go. A story about a Japanese Canadian girl relocated from Vancouver to a Manitoba sugar beet farm during World War II was obviously not my story to write. I’m not Japanese. I’m not a history major. I don’t have the experience required to do the copious research. When I realized this fictional girl would start writing letters to the farmer’s son, imprisoned in a Japanese POW camp—I knew for sure the story was not mine to tell. Good fiction must be historically accurate and believable. I’d be in so far over my head, I wouldn’t be able to see the sun. In June of 2018, I learned about a documentary called “Facing Injustice” in which my friend Terry Tully and his mom, Osono, appear. Osono was one of 20,000 Canadians interned during WWII because of her Japanese heritage. God was certainly all over this project and I am so humbled and grateful.

Rose Among Thornes is about a young Japanese Canadian girl who is relocated from her home in Vancouver to a Manitoba sugar beet farm during WWII. It’s also about a young Canadian soldier who spends most of the war in a Japanese POW camp, wishing more than anything he was back on his family’s sugar beet farm in Manitoba. And yes, their stories collide.

Historical Christian fiction. When I first began trying to write a novel, I picked historical because I figured it would be easier to get my characters into trouble with no modern technology to come to their rescue. Turns out there’s nothing easy about historical fiction, but I’ve come to love it—including the copious research. I always learn something new, if not for the current book, for another project.

God’s given me this gift and I’ll never know what He might do with it if I sit on it. I keep going because I want to see what happens if I don’t give up.

For me, it’s hammering out that first draft. I’m a pantser, so often just getting down that next scene feels like pulling teeth. Once I’ve got that done and can go back and start editing, I love it.

Getting to stay home. I retired two years ago after decades of working outside my home and I love not having to go anywhere besides the pretty office I’ve been able to set up at home.

I’m a Canadian and my novels are set in Canada.

Reading, of course. And movies.

I have three other historical or split-time novels out: The Silver Suitcase, Maggie’s War, and Bleak Landing. In November, I’m releasing The Last Piece. In 2020, I released a collection of the faith and humor columns I’ve been writing for my hometown newspaper since 2010, called Out of My Mind.

My current work in progress is called Even If We Cry. It’s about the British Guest Children who were shipped to Canada during WWII.