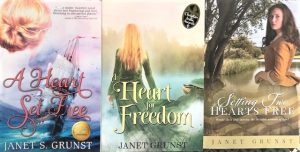 Janet is a wife, mother of two sons, and grandmother of eight. She lives in the historic triangle of Virginia (Williamsburg, Jamestown, Yorktown) with her husband. Brought up in a Navy family, she’s lived throughout the United States and in Spain. A lifelong student of history, her love of writing fiction grew out of a desire to share stories that communicate the truths of the Christian faith, as well as entertain, inspire, and encourage readers.

Tell us about your books.

How would you describe your books?

In 1770, Heather Douglas is desperate to escape a brewing scandal in her native Scotland. Penniless and hoping for a fresh start far away, she signs a seven-year indenture and boards a British merchant vessel headed to Virginia.

Widowed planter Matthew Stewart needs someone to help raise his two young children. The tall blonde standing on the Alexandria quay doesn’t look like much after her harrowing sea voyage, but there’s a refinement about her that her filthy clothing cannot hide. Could God be leading him to take this unknown indentured servant as his wife?

When Matthew purchases Heather’s indenture, he marries her, and takes her to his farm, she is faced with new and constant challenges. And Matthew wonders if they can ever bridge their differences and make a life together.

It is in the Virginia countryside that Heather begins her greatest journey, one of self-discovery and maturing faith. Here, she discovers that her emotional and spiritual scars bind her far more than her indenture . . . and love will finally set her heart free.

A Heart for Freedom

By 1775, the conflict has escalated between Loyalists and Patriots throughout the colonies. The Stewarts’ ordinaryand the surrounding Virginia countryside are not immune from the strife, pitting friends, neighbors, and families against each other.

Matthew Stewart has avoided taking sides and wants only to farm, manage Stewarts’ Green, and raise his family. But political tensions are heating up and circumstances and connections convince him that he should answer a call to aid the Patriot cause … with conditions.

Heather Stewart, born and raised in Scotland, has witnessed the devastation and political consequences of opposing England. Threatened by the prospect of war, she wants only to avoid it, and protect the family and peace she sought and finally found in Virginia.

The journey the Stewarts take is not an easy one and will involve sacrifice, and questioned loyalties. Lives and relationships will be changed forever. Ultimately the knowledge that God is faithful will equip them with courage to face the future … with a heart for freedom.

Mary Stewart spends the war years with her family at Stewarts’ Green, helping them operate their ordinary. Daily, she prays for Donald’s safe return, eagerly waiting for him … until that day the evil side of war touches her.

Two hearts changed by a war that dragged on for six years. Two hearts left hurting and struggling to find the love and trust they once knew. Is there a path for them to rekindle what was lost, Setting Two Hearts Free?

What inspired you to write these stories?

I love history and am fascinated by the inspirational origin of our country. Prayer and seeking God’s will were foundational to the Continental Congress. It was our first civil war, and with no established army and navy, we took on the world’s strongest military force—and founded a nation.

I journaled but didn’t begin writing for publication until my thirties when I left full-time employment to have a family. I had regular columns in two small local newspapers but decided I wanted to tell stories about critical moments in history that communicate the truths of the Christian faith, as well as entertain, inspire, and encourage readers.

I’m a seat-of-the-pants writer rather than a plotter—not by choice. I’ve tried to be a plotter because I’m a structured person who likes lists. Being a “panster” goes against my nature but perhaps it’s one of God’s ways of keeping me dependent on Him as He guides me through creating a story.

I continue to learn so much about the writing craft—and it fosters discipline and humility. I’ve also met and gotten to know some phenomenal friends and fellow writers.

The Year Without Summer is one of four novellas in The Highlanders: A Smitten Historical Romance Collection

Shoved off his family’s land in Scotland in 1816, Grant Cummings looks for work in Ulster Ireland. He needs money and a home to raise his young brother. Molly MacGregor loses her father and his income but she has no time to grieve as she sews and spins to earn enough to keep her and her young brother alive. Renting out her hut on their land might be the answer, but only if she can overcome her prejudice against the handsome Highlander who moves in. Her heart might soften to him, but not when he plans to set sail for America.

A manuscript that takes place during the Irish potato famine—dear to my heart as some of my ancestors came to the States from Northern Ireland during that period.