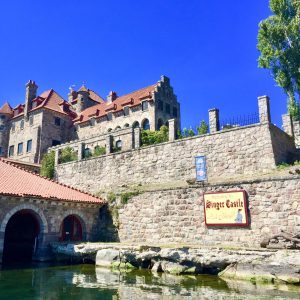 The castle can be toured from Memorial Day to Labor Day, and you can even spend the night there! I’ve toured the castle several times and even spent the night but still haven’t seen it all. While I’ve been all over the world, Singer Castle is still one of the most fascinating places I’ve been to.

Frederick Bourne, a New York resident, self-made millionaire, and the fifth president of the Singer Sewing Machine Company (thus the name “Singer Castle”), bought the seven-acre island and contracted Ernest Flagg, a famous architect of the time, to design the magnificent castle to surprise his wife and children. Flagg chose to design it much like the English castle in Sir Walter Scott’s book, Woodstock, complete with eight fireplaces, eight bathrooms, dungeons, secret passageways, a piazza, a portrait of King Charles II that can be opened to spy on guests, and more.

Construction began in 1903, but to support such a massive stone castle, Bourne bought nearby Oak Island and a plot of land in Canada to bring tons of granite to the island over water and the winter ice to build up the island. Two years later the 28-room, four-story castle was a wonder to behold.

Three towers/turrets, secret panels and passageways, massive stone arches, and the dungeon add mystery to the place. The island also includes three boathouses (one that houses a powerhouse), and an icehouse.

The castle is completely furnished with furnishings, a library full of books, dozens of sewing machines, period dishware, and all kinds of cool stuff from that era, most of which were actually there during the Bournes’ ownership and residence. Medieval weapons and suites of armor complete the castle’s ambiance.

Want to add this to your bucket list? Check out more here: https://www.singercastle.com