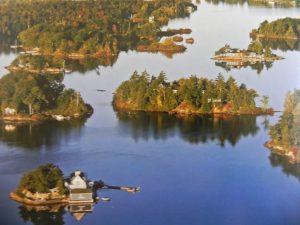 My latest work in progress is the first in a series about the Thousand Islands, and I’ll soon be heading there to do some research for my first two books in this series. There’s nothing like being there—seeing, hearing, smelling, feeling, and even tasting the uniquenesses of the place that becomes your setting for a story.

More than 1,800 islands are situated between New York and Canada in the St. Lawrence River. I grew up just 17 miles from the Saint Lawrence River and the Thousand Islands. They’re one the most spectacular places I’ve ever been to, and I’ve been to more than 40 countries.

Until the mid 1800s, these islands were largely uninhabited until George Pullman, the entrepreneur who developed the railroads sleeping car, invited Pres. Ulysses S Grant to come for a vacation during his reelection campaign. Reporters followed, and they told the country how beautiful this area was, and that started a rush to buy islands and build massive summer homes, mansions, even castles. Resorts popped up, fishing guides got rich, and the islands became a place for the rich and famous of their day to spend their summers. Back then, grand parties and famous get-togethers happened all throughout the summer. Stories of intrigue, wonder, and fun filled its history, and there is much history to tell.

The majestic St. Lawrence Seaway provides passage for huge ships from all over the world. People along its shores marvel at the passing ships, classic wooden skiffs, luxurious yachts, and family boats zigzagging through the water.

The small communities along its shores on both the Canadian and the American sides the river, as well as parks, tourist attractions like Boldt and Singer Castles, make this a great place to visit. Places like Wolfe Island, where my great great grandparents landed after emigrating from Ireland, and Cape Vincent, where my great grandparents became American citizens, are just two of the many communities here that are filled with history dating back to the 1600s.

It’s the stuff of movies and books, and since there are few of either one, I’m writing about it. I hope to bring this area to life, tease your imagination, and bid you to come and visit. I may be a little bias, but I think everyone should have this beautiful piece of the world on your bucket list.

Have you visited the Thousand Islands? I’d like to know!

← Being With You
God Talking →