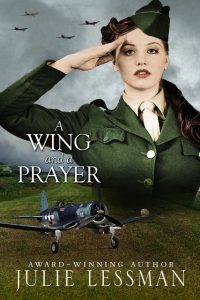 A street orphan abused and abandoned by an alcoholic father at age five, Gabriella (Gabe) O’Connor has never let a man stand in her way yet. So, when a handsome flight officer thwarts her plans to become a Women Airforce Service Pilot, she’s determined to join the war effort anyway she can. Her chance comes when she “borrows” foreign correspondent credentials from the Boston Herald—where her father is the editor—to stow away on a medical ship to the front.

Lieutenant Reece Kincaid pegs Gabe O’Connor as trouble the moment she steps foot on Avenger Field as a WASP cadet. As the eldest brother of a boy whose jaw Gabe broke in grade school, Reece is familiar with her reputation as both a charismatic ringleader and a headstrong hooligan who’s challenged every male and nun from grade school to college. As her WASP flight instructor, Reece eventually expels Gabe when she pulls a dangerous stunt. But when he is an evacuation pilot in France eight months later, their lives intertwine once again, exposing them to a danger as perilous as the German tanks roaming the Reichswald Forest: a love that neither expects.

What inspired you to write A Wing and a Prayer?

As an author of Irish family sagas and a lover of family in general, I longed to continue the story of the O’Connors, the close-knit Irish family I created in A Passion Most Pure, book 1 in the Daughters of Boston series. Through this first series and the subsequent Winds of Change series, I follow this passionate family through WWI beginning in 1916 all the way through The Great Depression in 1933. And now with A Wing and a Prayer, book 1 in The Cousins O’Connor series, the O’Connor’s family legacy continues with the first three O’Connor cousins during and after WW2.

From WASP to war correspondent, a charismatic troublemaker flies high in the war effort of WWII until a no-nonsense flight officer clips both her wings and her heart.

You might say I’m a jack of all trades because although I began my writing career as a historical romance author with ten O’Connor books, I transitioned into contemporary romance with my award-winning Isle of Hope novel and series. This series is loosely based on my own dysfunctional relationship with my estranged father and how God taught me to heal it. Next, I tossed my hat into the historical Western romance ring with my Silver Lining Ranch Series, and now I just finished writing a contemporary romantic suspense, which I am really excited about.

Why do you write romance?

Well, as number twelve of thirteen children, I suppose you could say I was starved for love. I read Gone with the Wind as a little girl, and when Scarlett seared Rhett with a look on the winding staircase of Twelve Oaks, I was a goner. That novel so inspired me that I immediately embarked on my romance-writing career at the age of twelve, penning a 300-page manuscript that forty years later became the basis for my debut novel, A Passion Most Pure, which I am blessed to say won American Christian Fiction Writers 2009 Debut Book of the Year.

So you might say I do it for myself and for women like me who crave a great love story with lots of romantic tension, but without the gratuitous sex. According to the American Religious Identification Survey conducted by the Barna Group, “nine out of ten women nationwide consider themselves to be Christian,” and yet the majority of these women wouldn’t read an Inspy romance to save their souls, and neither would I at one time because there wasn’t enough romantic passion in them for me.

I happen to believe that passion is important. Not just to romance readers, but to everyone on the planet. We were created that way by a passionate God who analogizes His own depth of love for each of us in a very passionate love letter called “Song of Solomon.” And what happens? The world uses this beautiful, God-given gift to shove sin down peoples’ throats, and I, for one, am really sick of it. I want to use passion the way it was intended—to teach people God’s precepts and therein, His love. It’s the cry of my heart, and I hope and pray that for my readers, my stories of romantic passion translate into passion for God.

The main character in A Wing and a Prayer is Gabriella (Gabe) O’Connor, and it’s a very interesting story how I chose her name. Way back before Amazon issued strict rules about reviews, I used to hold review-posting contests among my readers in which the one who posted the most reviews (all around the world on every site imaginable) would have a character named after them in my next book. Well, a reader friend by the name of Gabriella Dawn Smith actually won by posting over 300 reviews. But her nickname was Gabe, so I had to go with it. Turned out it worked pretty well because that tough and masculine name for a girl worked well for a tiny street orphan who was short on stature but big on brass. She was a rough-and-tumble tomboy who had been abused until she was five, when her father beat her and dumped her into a trash heap, leaving her for dead. Gabe ended up in an orphanage until the O’Connors adopted her, a young girl with a big heart for the underdog and an even bigger chip on her shoulder against men.

Oh, without question, promotion and research, in that order. As you know, most writers would rather write than promote, but unfortunately, promotion is a necessary evil for an author. But research was never my thing either, which doesn’t bode well for a historical author. In fact, it was the biggest hurdle I faced with A Wing and a Prayer because it’s a WW2 story where the heroine is both a WASP (Women Airforce Service Pilots) and a foreign war correspondent, and then the hero is an aeromedical evac pilot, making the story a real bear to write. I literally had to research on almost every page of this book, and sometimes every paragraph, no joke!

I’m not only talkin’ medical terms, military terms, WASP terms, pilot/airplane/Jeep terms and parts, 1940s terminology/hairstyles/fashion/etc., I also had to have my history down cold. As a result, I am happy to say that I now know more about WWII than I ever dreamed possible. Which, I have to admit, was pretty cool given the fact that I released the book in the same year as the 75th Anniversary of V-Day and VE-Day.

Oh, hands-down, the reader friends I’ve made, some of which have become dear friends. And then, of course, writing dramatic, breathless and compelling love stories is certainly no snoozer.

I call myself a CDQ (caffeinated drama queen) because I love, Love, love drama and angst in my books with lots of laughter, tears, and drama, which in the end is a good thing because it sure saves wear and tear on my marriage.

I love to watch old movies, read Christian romance, and host elaborate dinner parties a la Martha Stewart. I often joke I suffer from MSD (Martha Stewart syndrome) because I’ve been known to pipe guest’s initials into their twice-baked potatoes, cut napkin rings out of real lemons to hold lemon green beans, and sketch a layout for how the food would be placed on the plate. Which … was fine when I was younger and had the energy to do it, but these days, sitting at my computer with a candle burning and a cup of hazelnut cinnamon coffee is my pastime of choice. Although I do enjoy trail-bike riding with my hubby, chatting with friends and family around the fire pit on our lower deck, playing Mexican train dominoes, or just dinner out with people I love.

Oh, you bet! In fact I just finished writing my very first romantic mystery/suspense, which is book # 26! If anyone is interested in checking them out (along with some very cool trailer/videos), here’s the link: https://julielessman.com/books/

As mentioned above, I just finished my very first romantic suspense, which was actually a lot more fun (and challenging) to write than I expected. It’s called The Secret of Emerald Cottage.

Thank you, Susan, for this wonderful opportunity to speak with your readers. If anyone is interested in downloading a free prequel teaser novella for my award-winning book Isle of Hope: Unfailing Love, they can find it here: A Glimmer of Hope.

GIVEAWAY! Thank you, Susan, for this wonderful opportunity to speak with your readers—it’s been fun! And to thank your readers for coming by, I am giving away winner’s choice of any one of my indie e-books to three different winners, so just leave a comment below, and you’re in the draw.

Also, I have the following freebies/sale currently going on:

l  FREE E-COPY of my award-winning novel, Isle of Hope (listed on Family Fiction magazine’s Top 15 Novels of 2015), and other giveaways at Mysti’s Book Nook Facebook Book Club. Details can be found on my Journal Jots blog.

l  FREE DOWNLOAD of the prequel novella to Isle of Hope, which is called A Glimmer of Hope, so take advantage of this free e-book HERE!