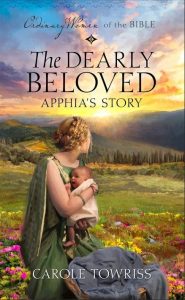 An unapologetic Californian, Carole Towriss now lives just north of Washington, DC. She loves her husband, her four children, the beach, and tacos, though not always in that order. In addition to writing, she binge-watches British crime dramas and does the dishes for the fourth time in one day.

The Dearly Beloved is book #24, the last book in Guideposts’ “Ordinary Women of the Bible” series. The series is 24 books written by 17 amazing biblical fiction authors.

What inspired you to write The Dearly Beloved?

The practice of abandoning babies was common in ancient Greece and Rome. Many were girls since boys were so heavily favored. They were known as expositi – exposed ones. Nearly all of them were taken in as free slaves by the poorer residents of the city, but I wanted to explore what might happen if one were taken in as a daughter.

A young widow, Apphia’s life changes the day she finds a precious exposita—an abandoned baby girl—on the steps of the temple. She names her Kalyani. But Kalyani is only three when Apphia’s brother declares that the child is his slave, as Apphia cannot legally adopt her. Apphia flees with Kalyani to Kolossai where they are welcomed by a house church and treated as family. She becomes a follower of the Way, but still fears that her brother may one day locate them. Can she trust the church to protect her? Or will her brother’s greed steal away her daughter and the happiness they have found?

I write about people in the Bible who are consider “minor characters” – not the Davids and Esthers but the people who are unknown to most – some who aren’t even named. I like to look at the common Bible stories from a different perspective.

I had no choice! The Dearly Beloved is the story of Apphia, who is mentioned only once in Scripture, in a greeting in the letter to Philemon, where Paul addresses her as “the beloved Apphia.”

I try to do as much research before I start as I can, though I still end up doing a good amount as I write. Then I try to write 1000 words a day.

The best part is when a reader tells me my story touched them, drove them to seek God. That’s why we write as Christians, isn’t it? To draw people closer to God.

Watching British crime mysteries. Especially the ones set in the past. I love the history of it.

I have six books I published independently, and two others I wrote for Guideposts.

I’m currently writing book #2 of my “Planting Faith” series. These books follow Paul in the various cities he visited. The first was set in Philippi and features the slave girl whom Paul delivered from a spirit of prophecy, and the jailer whom Paul led to Christ after the earthquake. This one is set in Thessalonica and is about one of the “prominent women” who came to faith, and Jason, Paul’s host during his visit.