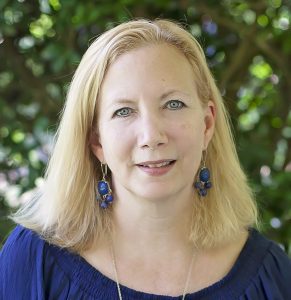 Janet W. Ferguson grew up in Mississippi and received a degree in Banking and Finance from the University of Mississippi. She has served as a children’s minister and a church youth volunteer. An avid reader, she worked as a librarian at a large public high school. She writes humorous inspirational fiction for people with real lives and real problems. Janet and her husband have two grown children, one really smart dog, and a cat that allows them to share the space.

Set in St. Simons, Georgia, the novel delves into the various sides of addiction: from those ravaged by the agony of addiction, to those heartbroken over a loved one lost in addiction, to those who have been brutally scarred because of an addicted person’s actions, to those who have been healed from its clutches. Addiction was a tough issue to write about, but I believe the story offers healing through God’s grace. And I always add a fun pet along with a bit of humor where possible.

What inspired you to write The Art of Rivers?

In 2017, the year I started this novel, drug overdoses killed over 70,000 people in the United States. Drug addiction and alcoholism are devastating families and communities. I felt called to shine God’s hope into the dark places of pain and shame.

I write contemporary Christian romance because I feel led to write about issues that people are dealing with in a current setting. I write to offer the hope of Christ. And historical fiction would require way too much research, ha!

I wrote my first story Leaving Oxford to encourage other who suffer from anxiety and panic attacks like I’ve dealt with it for many years. It continued from there. I feel like God places an issue or a story in my mind.

Funny you should ask. The heroine is named Rivers, as in The Art of Rivers. I haven’t told anyone else because I was wondering if someone would figure it out. But there are several other characters with names that are actual names of rivers: Cooper, Jordan, Savannah, Brooklyn, Pearl, James.

I’m so unscheduled, and it’s not funny. I wish I had one. Maybe someday.

Wearing a ponytail and yoga pants!

I’m deaf in one ear, and I circle people trying to get them on my good ear!

Just one? I have a few! I eat out as often as possible or have my son cook (I generally avoid cooking), walk outdoors and take pictures of God’s beautiful creation, Bible study with my small group, travel as much as my husband lets me, provide constant compulsory petting to my cats and dog, and hang out with my family and friends. Oh, and I love music!

I do! My first book is Leaving Oxford which is currently free! There are three other books in that series, and two other novels in the Coastal Hearts series.