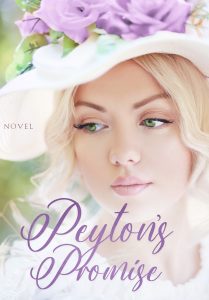 Have you ever enjoyed a secret sign of love with someone? Peyton and Patrick did. Here’s an excerpt from Peyton’s Promise. Hope you’ll grab a copy and enjoy…the rest of the story!

As Mrs. Milton returned to the kitchen, Patrick caught Peyton’s eye, tapping his hand to his chest, his middle and ring finger pressed to his palm.

She sucked in a breath. As a child, he’d taught her that sign—the sign for “I love you”—and used it whenever she found herself in a pickle. When she’d asked why, he’d said it was a sign of solidarity, of friendship.

Friendship … and only friendship.

Is that what it was now? If so, why did her heart speed up, her face flush, and a lump in her throat threaten to cut off her oxygen? She gave a nod of thanks and focused on her fish dinner.

Since arriving on the island, she’d sensed his feelings were different. But she couldn’t figure out how. One moment, he disapproved of her. The next, he’d show his affection.

And her emotions? They staggered around like a drunken sailor.

Peyton ate a few bites despite her lack of appetite. One by one, the staff left the table. She nibbled at her bread. She’d wait until they were all gone so she didn’t have to see their stares or listen to their opinions of her.

“Let’s take a walk.” Patrick stood behind her, ready to pull out her chair and escort her out of her humiliation.

She patted her lips, set her napkin on the table, and rose. “Thank you, sir.”

In silence they left the room, walking along the path and down the steps toward the lagoon. Keeping a circumspect distance, they waited until they were far from any other staff member before speaking.

“Thank you, Patrick, for trying to defend me. That woman has it out for me, though I don’t know why.”

“You’re different, and that threatens her control. She wants to be the general of her troops who all align with her rules, her dictates, even her thinking. You’re outside of that in every way, and it drives her to distraction.”

Peyton giggled as she stopped to admire a huge freighter passing the island. The setting sun hovered low on the horizon as crickets took up their noisy goodnight ritual.