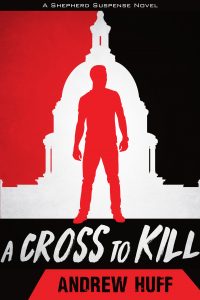 Andrew Huff is an accomplished novelist and screenwriter who works in the church media and entertainment industry after spending 10 years as both a youth and creative leader in local church ministry. He holds a Bachelor of Science degree from Liberty University and a Master of Arts from Dallas Theological Seminary. He currently calls North Texas home where he and his wife Jae raise their two boys and rescue dog.

A Cross to Kill was my debut novel back in October of 2019 and the first in a suspense series that continued with the release of my second novel, Cross Shadow, in May of 2020. A Cross to Kill is an action thriller featuring a former CIA assassin turned evangelical pastor named John Cross who is faced with questions of his past after a vengeful terrorist visits his church. Caught in the crossfire are the congregants of the small country church in Central Virginia that John serves as well as a foreign correspondent named Christine Lewis who is rescued from execution by John on his last mission with the CIA as the story begins.

I wrote A Cross to Kill to appeal to fans of novels, films, and TV series such as The Bourne Identity, Mission Impossible, and 24that feature non-stop action and suspenseful twists and turns. At the same time, I wanted the moments between the action to be rich in theology and Christian values. There’s violence in the book, but not of a gruesome nature. There’s romance, but without obscenity. Anger, but nothing profane.

What inspired you to write A Cross to Kill?

I was inspired to write the novel on one of the frequent visits I would make to local hospitals as a pastoral member of the staff of a church. I was already in the habit of dreaming up characters, situations, and storylines, and on one particular trip to a hospital I imagined what it would be like for a pastor’s secret, dark past to surface in the middle of him trying to care for his flock. One of my favorite scenes in the novel then came to life in my imagination, and from there I really wanted to see how this story would unfold.

I was also inspired by real life, high profile events such as the rescue of American diplomats by the CIA from Iran in 1979 (fictionalized in the movie Argo) as well as the abduction and execution of journalist James Foley by Syrian terrorists in 2012. While many elements of my story are “heightened reality” (the action often takes a sensationalized turn), I also wanted to ground the plot in situations that aren’t that far from what has or might generate news headlines.

I write suspense thrillers because those are the kinds of books that I love to read. My favorite authors include James Rollins, Clive Cussler, Matthew Reilly, Robert Ludlum, and even Dan Brown. As I consumed their stories, the problem I kept experiencing (especially when it came to Mr. Brown’s novels) was that while the stories were thrilling and adventurous, there were sometimes values and worldviews antithetical to my Christian beliefs. I decided I would try my hand at writing the kind of novel that I wanted to read, one high on thrills but also deep in theology.

I also focus on this genre because of my love for action and suspense blockbuster movies. I’m greatly inspired by the thrills of franchises such as Mission: Impossible, Jason Bourne, and James Bond. I want my novels to take the Bible and the Church seriously while offering the same kind of jaw-dropping action those novels and films excel at.

I would also say I write because I love the work of storytelling. It’s so much fun to create a cast of characters, put them in life-threatening situations, and then see what happens as a result. While I’m always ultimately in charge of how the story plays out, I’ve been amazed at how often the characters take on a life of their own and surprise me with how they influence the direction of the plot.

The main character in the Shepherd Suspense series is former CIA assassin turned evangelical pastor John Cross. In A Cross to Kill, we’re introduced to John early in his career in ministry when he’s still struggling with forgiving himself for his past deeds. Coming up with his name was a rather boring process. I wanted his first name to begin with the letter J and both his first and last names to be single syllables. I eventually arrived at John Cross by process of elimination!

As much as I would like it to be the case, I unfortunately do not make a living just as a fiction writer (I think that’s true for a lot of us!). So, I need to be disciplined in weaving my writing into my weekly schedule to make sure that there’s an appropriate balance between it, my full-time job, and my responsibility to my family and church. Every week I have nights designated specifically to writing and I try to keep all of my writing to those scheduled times.

When working on a specific book, I spend an unspecified amount of time researching and outlining a book before I ever write a chapter. I like knowing exactly how a chapter will play out before jumping in. That being said, I also leave plenty of flexibility to my stories and characters to change things up should I be struck by creativity in the middle of writing. Once I feel confident in the outline, it only takes me about six months to arrive at the draft I will submit to my editor.

First off, I want to encourage your readers that if they aspire to write anything it is so important to remember that you always have something to learn. Keeping open eyes and ears to ways in which I can improve as a writer has served me well over the years, and I honestly cannot recommend conferences and workshops enough. Get around other writers, take classes, and practice, practice, practice!

One of the ways I’ve personally grown as a writer is recognizing my weaknesses as I write. In the beginning, I would make the same mistakes over and over again, but over time I’ve been able to catch the mistakes prior to editing. Passive writing is especially a weak spot for me (and it can be a big hurdle to get over), but fortunately I’ve gotten better at recognizing it when I fall into it and correcting course on the fly. That isn’t to say I don’t still have work to do to make sure my writing is the best it can be!

Spending time with family is a priority, and we love a variety of shared activities such as taking walks, having NERF gun battles, competing in Mario Kart competitions, and playing board and card games. But my all-time favorite pastime is visiting as many of the local coffee shops in the area as many times as possible with my wife Jae. I’m also very into football in the fall, having even coached my sons’ flag football teams in the past.

I am also very involved in church. I teach an elementary age boys’ small group, lead teach for all age groups in the children’s ministry, and co-lead a home group of adults. Throw in the 9-5 job, and my week gets filled pretty quick!

I do! A Cross to Kill was the first in a trilogy of books called the Shepherd Suspense Series. The series follows the main characters of John Cross and Christine Lewis. The second book in the series, Cross Shadow, released in May of 2020. The story picks up one year following their initial meeting in A Cross to Kill. Christine is new to a relationship with Christ, and both she and John are new to the challenges of navigating a romantic relationship as professing Christians. Both are faced with embracing aspects of their former lives when Christine’s stepbrother is accused of murder in Texas and Christine gets herself involved in the mystery to John’s disapproval.

The third book is coming in March of this next year (2021). Titled Right Cross, it’s more of a global thriller as John Cross and Christine Lewis face their most difficult challenge yet. The novel opens with John appearing to have fallen away from his faith. A determined Christine seeks to answer why, only to find herself at the center of a cyberterrorist plot to alter the balance of power in the world. From the English coastline to the Rocky Mountains, it’s a race against the clock to stop the threat of nuclear war.

I’m really excited to share two big projects with you that I’m working on right now. First, I recently signed a contract with Kregel Publications to write a brand new three book series tentatively titled Task Force Phantom. This new set of stories is a spinoff of the Shepherd Suspense series and will follow both familiar and new characters on action-packed missions in a more global setting. You can visit my author website for a special sneak peek at the series and to get updates on when the books will release!

The second project I’m working on isn’t a novel but a web series that I’ve written and directed for a brand-new Christian streaming service called Igniter TV. Igniter TV is set to launch this fall and is committed to providing content that both equips and entertains. My series is called Dot Conner: Webtective and is uniquely designed for elementary age kids. Each episode follows amateur internet detective Dot Conner as she investigates questions and mysteries of the Bible alongside her two best friends. The first season is currently heading into production, but the pilot episode of the series is available to screen now at www.ignitertv.com.