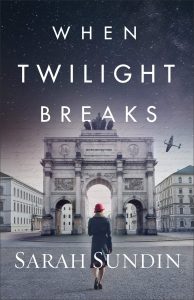 Sarah Sundin is a bestselling author of World War II novels, including When Twilight Breaks and the Sunrise at Normandy series. The Land Beneath Us was a 2020 Christy Award finalist, The Sky Above Us received the 2020 Carol Award, and The Sea Before Us received the 2019 Reader’s Choice Award from Faith, Hope, and Love. A mother of three adult children, Sarah lives in California and enjoys speaking for church, community, and writers’ groups.

Munich, 1938. American foreign correspondent Evelyn Brand is determined to prove herself in her male-dominated profession—and to spotlight the growing tyranny in Nazi Germany. Working on his PhD in German, fellow American Peter Lang is impressed by Germany’s prosperity and order. But when the Reich’s brutality hits close, he decides to use his connections in the Nazi Party to feed information to Evelyn, pulling them deeper into danger as the world marches toward war.

What inspired you to write When Twilight Breaks?

When my family visited Ellis Island a while back, I fed family names into their computer and found my grandfather’s return trip from Hamburg, Germany to New York in 1936. I knew he’d studied in Germany—he was a professor of German—but I hadn’t realized he’d studied in Hitler’s Germany. I wondered what it would have been like to have been an American student in Nazi Germany. I decided to set my novel in 1938, which was a momentous year, and to have a female foreign correspondent as the foil—and love interest—for my doctoral student.

All of my published novels have been historical fiction set during World War II. When Twilight Breaks is actually set right before the war, which was new and fun for me. Historical fiction suits my writing voice, and I’ve found I love research. And World War II has been a good fit for me. It’s a time full of drama, daring, and romance—plenty of material for a novelist!

I know every writer says this, but I can’t not write. The characters won’t let me stop. Their stories have to be told. So I write.

The main characters in When Twilight Breaks are Evelyn Brand and Peter Lang. I like to choose names that were popular in the era. Evelyn just had the right sound for my spitfire reporter—and I had fun with her last name when Peter meets her and accidentally calls her Miss Firebrand instead of Miss Brand. As for Peter, his name was something completely different when I wrote my proposal, but it just didn’t fit. He kept telling me his name was Peter. I told him it couldn’t be because I had a Pete as a hero in a novella I wrote. Then he said he wasn’t a Pete and never had been a Pete, but he was most definitely Peter. He won that argument. Yes, novelists are strange people.

I’m not a morning person, and my brain doesn’t kick in until afternoon. So I fill my mornings with emails and social media and the business part of writing. Over lunch, I read research books. Then my afternoons are free for outlining, writing, and editing.

I try to challenge myself with each new book or series, because I want to grow as a writer, and I don’t want to write the same book over and over. For my current three-book contract, I’m writing standalone novels rather than a series, the novels are set in Nazi-occupied Europe rather than the US Home Front, and I’m exploring some deep ethical dilemmas. I don’t know if I’ve seen the growth myself, but my readers say they’ve seen it. But then, it kind of feels like when you’ve lost weight and people say, “Wow! You look great now!” And you say to yourself, “How bad did I look before?”

Before COVID, my favorite pastime was taking my barre class at the gym. But my gym is closed. I’ve been walking a lot and found I love the combination of vigorous exercise, fresh air, and fresh sights and sounds. Plus, we adopted a new dog this fall, and he loves long walks at a brisk pace. It certainly helps counteract the effects of the sedentary writing life.

When Twilight Breaks is my thirteenth novel. My most recent series is Sunrise at Normandy, which follows three estranged brothers who fight on D-day from the sea, in the air, and on the ground. The titles are The Sea Before Us, The Sky Above Us, and The Land Beneath Us.

I just finished my next novel which follows two Americans living in Nazi-occupied Paris in 1941, when the United States was still neutral. It features a charming bookstore, aid to the resistance, and an opposites-attract love story. It was an exciting and romantic story to write!

Link to book: Book page on my website: http://www.sarahsundin.com/books/when-twilight-breaks/