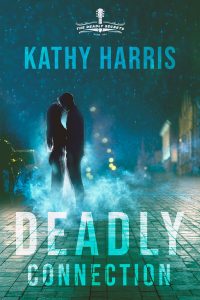 Kathy Harris has worked as a marketing director in the Nashville music industry for more than 30 years. Her first professional writing job was freelancing entertainer biographies. Later she wrote news stories and columns for various music publications. She has also contributed to several anthologies. Her debut novel was released by Abingdon Press in 2012. Deadly Connection, the second book in The Deadly Secrets series, just released.

After fending off a would-be abductor, 27-year-old singer-songwriter Hannah Cassidy hides behind a car in the half-empty parking lot behind Pancake Pantry in Nashville. From there, she watches in horror as her attacker grabs another woman and pushes her into a nearby car. Within seconds, the vehicle speeds away.

TBI Special Agent Jake Matheson may have planned a quiet day off and a date with Shannon―the only name her online profile revealed―for an introductory lunch, but after pulling into a parking space on 21st Avenue South, he hears a scream and finds a frightened young woman gasping for breath. Thrown together by uncanny circumstances and driven by the whys and what-ifs of secrets yet to be revealed, Hannah and Jake set out to find the connection between them before it becomes deadly.

What inspired you to write Deadly Connection?

It’s the second book of my romantic suspense series set in Nashville with heroes who are Special Agents with the Tennessee Bureau of Investigation.

Singer-songwriter Hannah Cassidy and TBI Special Agent Jake Matheson are thrown together by uncanny circumstances. Will they uncover the secrets between them before it becomes deadly?

Romantic Suspense. It’s one of my favorite genres to read.

I’ve wanted to write books since I was a young girl in elementary school. I followed up on that dream by majoring in journalism, and minoring in English, in college. After receiving my B.S. in Communications from Southern Illinois University, I moved to Nashville to take a ground floor job in the music industry. But a writer writes… and I finally got around to finishing a manuscript in the early 2000s.

I was motivated to keep writing, and to hone my craft, by other writers I met through American Christian Fiction Writers. Those early friendships are now longtime and treasured friendships. Ultimately, however, I am motivated by wanting to encourage others in the faithfulness of God.

Hannah Cassidy is the heroine in Deadly Connection. She is an up-and-coming singer-songwriter, who is talented, beautiful and vivacious. But it’s Hannah’s never-say-die attitude that makes her the most attractive to Jake Matheson, a Special Agent with the Tennessee Bureau of Investigation.

Character names are important to me, and it’s somewhat unexplainable how I choose them. However, until I can settle on the right name, I can’t write the character.

This book was an anomaly for me. I wrote it in three months, while working my full-time job. It was a busy three months. I wrote till 1 or 2 a.m. many nights.

There are a lot of hard parts to writing… staying in the seat, staying focused, and believing in your ability to complete the task.

The creative process. There’s something incredibly satisfying about storytelling. When I finished my manuscript for Deadly Connection, I thought about this quote from Joseph S. Bonsall’s book From My Perspective: “The creative process. Something that exists today that was not here yesterday. A song. A book. A rebuilt kitchen countertop, or even a new recipe for scampi.”

I’ve always loved cooking. And, because I’ve spent so much time at home in the last year, I’ve had time for gardening, which has become a passion. A friend and I are working on a food blog to combine those two things.

My first published novel was a Christian women’s fiction standalone entitled The Road to Mercy. It was the book of my heart, at least at that time, and was based on a traumatic event I witnessed in childhood.