Confessions of a Conflict Hater 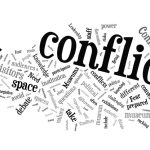 I don’t like getting into disagreements with my husband. I don’t like having a spat with a friend. As a parent, I hated the constant conflict resolution that was needed when my two kids didn’t get along. As a teacher, I sure didn’t enjoy being the one who had to break up the many tiffs between pubescent girls. And as a Grandma? Well, let’s just say that I sometimes choose to become an ostrich. You get the idea.

So when I began writing fiction, I had a problem. I knew that conflict is a main ingredient to a good story, and if I was going to write good, compelling fiction, I had to have compelling conflict that would hold the reader’s attention. But how was I going to address the very thing I was tempted to run from? I had to settle that question, and quick!

Although conflict is often present in almost every day of most of our lives, we often overlook or ignore it. Hubbie doesn’t want cereal for breakfast. Son wants to play before he does his homework. Daughter doesn’t like the way you did her hair. Colleague disagrees with a decision you made. Neighbor dislikes your dog barking. The list goes on and on.

For me, when confronted with conflict, I tend to self talk, fret, stew, worry, and struggle with sleepless nights. But those ways of dealing with conflict don’t make a good story.

Conflict is uncomfortable, and most conflict just plain hurts. But that’s what keeps readers reading. Like you and me, readers want to know how others deal with conflict, how characters try and fail and try again and finally succeed.

So I turned to my first two non-fiction books that deal with preparing for marriage for advice, and I applied what my counselor-husband and I wrote. We had great tips and guidelines and personality types and ways to solve difficult conflict, and I applied those ideas to my characters’ lives. Bingo!

Because it’s hard for me to invent conflict when I want to avoid it, I had to be aware of this weakness. So when I was doing my rewrites and editing, I often had to add an element of conflict or deepen it. I realized that I was, indeed, running from conflict even as I wrote. Recognizing this helps me be cognizant to include the very thing I hate. As I grow in my craft, though, I trust I will grow in this area as well.

How do you handle conflict? I’d love to know!