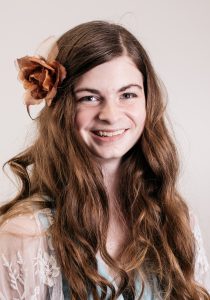 Hope Bolinger is a literary agent and published YA author (Blaze, LPC). She’s worked for various publishing houses, magazines, newspapers, and agencies. More than three hundred of her works have been featured in various publications, ranging from Writer’s Digest to Keys for Kids. She’s obsessed with all things theater, chocolate, and fire.

Blaze is essentially the first three chapters of the Book of Daniel plopped into a high school. It follows the story of Danny as he transfers to a rival school after his previous school mysteriously burns down. Turns out, the arsonist attends the rival . . . and they don’t seem content setting fire to just one thing.

What genre do you focus on and why?
I found my niche in the young adult market. I remember my time as a teen, three years ago, as a period of turmoil, transition, and the constant need to trust in God. Teens nowadays face bigger and more complex problems than ever before. I wanted to write to that market to come alongside teenagers and say, “It’s hard. But I made it through. Here’s how you can do it.” Plus, I think young adult authors get to have all the fun.

Why do you write? What drives you?
I write “what if” scenarios I would never want to end up in. Burning building? Let’s stick some characters in there. My stories drive me. They burn up inside until I have to release them on paper. I have to write. I can do nothing else.

Who is your main character, and how did you choose that name?
Danny Belte. Derivative from Daniel/Belteshazzar found in the Book of Daniel. He’s a sixteen year old with a sense of humor—often implemented in the worst situations—and severe anxiety.

What does a day in your writing world look like?
Like my books, everything’s on fire. Except, not in a literal sense. Usually I try to hammer out 2,500-3,000 words a day when I’ve begun a writing project. Finding the time for that can prove a trial in itself. Back in high school, I used to write chapters instead of paying attention in math class. Probably explains my Pre-Calc grade . . . I try to find a quiet space and take breaks after every 1,000 words, unless I’ve tapped into the muse. Sometimes I’ll forget about things such as food and bathroom breaks.

What is the hardest part of being an author? Why?
Almost everything else that happens after you write the book. I’ve started to take to liking editing and marketing. I used to hate them. But I would say the waiting takes the cake. After writing a book in the span of 30-45 days, editing it/beta reader testing it for the next two months, you have to wait to hear back from publishers. This can range from several weeks to months, and usually it tends to result in rejection. If they take it on, you have at least a year before you have a physical book in your hands. I love every minute of it, but the waiting does kill you a little inside.

What’s the best part of your author’s life? Why?
Everything. Warts, waiting and all, I would never do anything else. Even when people post nasty reviews or drop out last minute on an endorsement, at the end of the day, I had a chance to create something, and I wouldn’t trade that for anything.

What is the craziest thing you’ve experienced as an author?
Honestly, a lot of God things. When a reviewer would drop out, He provided another. Or when someone bailed, He sent someone else my way.

For instance, I had an endorser drop out on me, and I got worried because he was an author I’d looked up to. And I understood about busy schedule. Even if we’d connected in September about the book, life happens. At that point, I’d had a number of bloggers quit, and I grew anxious that all the work I’d done for the previous nine months would go to waste. But then I received an email for the leader of a local writer’s group of about 1800 members contacted me saying she had the song, “High Hopes” stuck in her head for the past several weeks, and when she saw my name, she knew she had to contact me to come and speak with her group.

What are you most proud of?
Is it bad if I say Blaze? I’d had the dream to get a book published since I took up novel writing at 16. I’ve written 17 books, 13 plays, and 300 other published works since that time It took hundreds of rejections, dozens of edits, a 25-page marketing plan, and a great deal of wanting to give up. Even if it doesn’t sell well, even if it sells two copies, I still can’t believe this dream came true. If I can make it, any author can.

What is your favorite pastime?
Theater. Stick me on stage, and I feel right at home. If God decided one day I shouldn’t write anymore, I would find a way to get involved in every theater in the area.

Do you have other books? We’d love to know.
Yes, we have several books out on query.

What are you working on now?
My coauthor and I plan to do the finishing touches on Picture Imperfect. I also plan to begin Dreams, the third installment of Blaze. I also have three other books ideas I’m juggling in my head right now, trying to determine which one I should start first.

← Gina Holder on Adoption
Kathleen Maher on the Civil War →