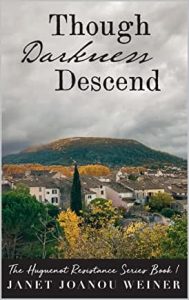 Janet Joanou Weiner is an American living in France for almost twenty years. She and her husband make their home in the 500-year-old Château de Planque, where she daily wishes the walls would tell her all the stories. Their small town in the south of France is steeped in history as epic and dramatic as the mountains soaring high just beyond her home. The beauty, the culture, the people are all constant sources of inspiration.

Though Darkness Descend: The Huguenot Resistance Series, Book 1, is my debut novel, based on actual 17th-century events in my small town in southern France and the Château de Planque where I live.

The story focuses on a young Huguenot woman, Jeanne Tessier, who is unwilling to die for a faith she doesn’t possess. Where was God when she desperately needed him? In her darkest hour, he didn’t seem to hear or care. Jeanne has kept her lack of belief hidden from her Huguenot community. But with the imminent threat of twelve hundred dragoon soldiers sent by King Louis XIV to suppress them, she faces upheaval in every way–including her hope of marrying Etienne.

Fighting for her way of life, she follows Etienne against his wishes and warnings from her close friend Pierre. When the dragoons move into her home, the Château de Planque, Jeanne discovers where God is in suffering and death, who she truly is–and whom she truly loves.

What inspired you to write Though Darkness Descend?

I’ve always loved history and majored in it at university. I’m so grateful to live in an area with centuries of fascinating events.

When we moved to our small town in the south of France, into a 500-year-old château, I began researching the local history. I discovered story after incredible story of the stubborn faithfulness of the Huguenots despite severe persecution. Even in France, this chapter of history is not widely known. By sharing these events in the form of historical fiction, I hope many will find encouragement and inspiration.

As 1200 dragoon soldiers arrive in her town, a young Huguenot woman faces persecution and possible death for a faith she doesn’t possess. Until now, she’s kept her lack of belief hidden. But with King Louis XIV determined to bring the Protestants under control, Jeanne embarks on a journey that leads to an unforeseen end.

Historical fiction is my personal favorite, so that’s what I write. I find it fascinating to learn of different times and cultures, and nothing makes it more alive than living it with great characters.

I write because it is what God has asked me to do so. I write because I have so many words! So, I thought I’d better put them into stories before driving my family and friends crazy.

My main character is Jeanne Tessier, a young Huguenot (French Protestant) woman. Her name is a common one from the time (17th century) and also happened to be my name in middle school French class.

I aim to write mornings, usually Monday through Saturday, for 2-4 hours a session.

It’s challenging to get the word out about the book beyond family and friends.

For me, the joy of co-creating with God is deeply satisfying. I’m continually amazed at the ideas that flow out.

I’ve lived in four different countries: USA/California, the Netherlands, France (the French Alps, Paris, the south of France), and Kona, Hawaii (not really a country, but a unique culture). And I’ve traveled to over 40 countries, primarily for mission work.

I’m still relatively new to writing, but as I work on my second novel, I’m happy to apply the many lessons learned through crafting the first book.

Not yet. I have plans for the Huguenot Resistance Series to have four books. I’ve also compiled memoirs and travel stories that include humor and spiritual insights, which I hope to publish someday.

The second book in the Huguenot Resistance Series. Also based on events and people in my town and region, it picks ups 17 years after the end of Book 1. Again, some of the characters from Though Darkness Descend appear, plus several new ones.