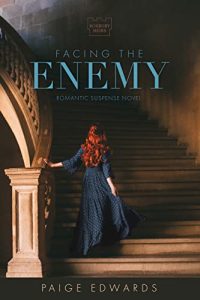 Paige Edwards is a Reader’s Favorite Book Award recipient, a Forward INDIES, Whitney, and RONE finalist. Due to her deep British roots, Paige’s romantic suspense novels are often set in the UK, and she hops the pond whenever she gets the chance. When she needs a break from writing, she serves as president of her area’s Interfaith Community Council, gardens, bikes battlefields, and kayaks near her home in Virginia.

Lady Elise Henderson lives two separate lives. At home in Scotland, she’s the titled daughter of the Marquess of Roxbury, an heiress in her own right. In London, however, she’s Elise Taylor, a top MI6 operative for the “home office.” But when a devastating accident threatens to end her career, Elise is left with far too much time for self-reflection and the regret of a decision made long ago that features one man: fellow MI6 agent Harry Benson.

Harry Benson, the son of servants, has loved Elise for the better part of a decade. But life took them on separate journeys until their worlds converged once more. An immediate assignment to the Scottish Borders leaves Harry little time to make provisions for his small, rambunctious son, Sammy. Harry knows only one person he can rely on for the boy’s care—Elise. When Elise brings Sammy to her ancestral estate, she never imagines a nemesis from her past looms in the shadows, hungry for revenge. Stalked at every turn, Elise and Harry discover that fighting their feelings for one another is futile, but can they survive long enough to get another shot at true love?

What inspired you to write Facing the Enemy?

When I finished Danger on the Loch, many of my readers wanted to know what happened to Harry and Elise. Until then, I hadn’t considered writing their story. Naturally, their questions spurred all sorts of ideas, and Facing the Enemy (the first novel in my Roxbury Heirs series) is the result.

It’s a second-chance romance between two MI6 agents set in Scotland. While on medical leave, Agent Elise Taylor discovers that the man who killed her former MI6 partner is hunting her to exact his revenge.

I grew up reading Mary Stewart, Victoria Holt, Phyllis A. Whitney, and Helen McInnes, so I naturally gravitated toward romantic suspense and mystery genres.

I’ve always had stories swirling inside my head, and I love to figure out twisty plots when I’m reading or watching TV. But the main driving factor that pushed me toward publication was to draw readers closer to God (in a non-preachy way), to inspire and uplift them via the character’s personal journey.

I generally craft two main characters to provide greater scope to the type of stories I write. In Facing the Enemy, Lady Elise Henderson’s (aka MI6 Agent Elise Taylor) surname is one of my Scottish family names, and Elise came from my daughter-in-law’s sister.

After my early am devotional, I plunk myself down at the computer and write until I reach my word count for the day.

Plotting. Why? I love to create characters and settings, but plotting takes me a while. My stories demand two full arcs (romance and suspense/mystery), then I braid them together into one complete story.

When a box of newly printed books arrives in the mail. Why? Up until then, it isn’t real. Even now, looking at the books on my shelf is a bit surreal.

I have a legitimate title in Scotland. When the hubs and I hop the pond, I’m the Lady Paige Edwards. Don’t be impressed. We own a historic property that came with the title. When we sell the place, the title goes with it. It’s a fun talking point but nothing more. Most peeps in the UK (except royals and a few others) don’t use them.

I’ve learned so much since I first started writing. My goal is to improve something in each novel. To ensure that my writing doesn’t stagnate, I regularly attend writer’s conferences, check out ACFW’s online classes, and meet with my critique groups.

Hillwalking through Scotland (when it’s not pouring rain). The air is cool and almost sweet, the perfect conditions for climbing Munros and taking in the spectacular views.

Do you have other books?

I do. My novels can be found on Amazon, Barnes and Noble, Seagull Book, and Deseret Book. I’ve even seen a few at Costco from time to time.

I’m revising a book in my Pressley-Coombes series and have started book two in my Roxbury Heirs series (Elise’s sister’s story). I also have a novella coming out in an anthology on October 1st called Sinister Secrets.