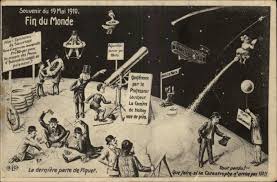 Think the world is coming to an end? In February 1910, astronomers announced that the Earth would pass through the cyanogen-laced tail of Halley’s Comet. Poisonous gas, Cyanide, would snuff out all life and end the world as they knew it on May 19, 1910.

The New York Times ran the story of the French astronomer Camille Flammarion’s theory which reported that poisonous gas, Cyanide, would snuff out all life and destroy the earth! Most astronomers in the scientific community rejected this theory but thanks to this article, the frenzy had begun.

The press took advantage of the people’s concerns and fed on their fears—and papers flew off the shelves creating more and more fear, even suggesting the comet might crash into the earth and obliterate it. People feared for their lives and went into hiding.

People bought “comet pills” and gas masks. Telescope sales rocketed; at least if they were going to die, they might as well see something wonderful. Newspapers, drug dealers, and gas mask makers got rich, but the terror that was instilled in many cast a pall on the world for several terrible months. I tell all about it in my novel, Devyn’s Dilemma.

On May 19, 1910, Halley’s Comet spent six terrifying hours passing through our atmosphere. One Oklahoma group actually planned to sacrifice a virgin to appease the gods, but thankfully they were stopped. A man in California nailed a hand and his feet to a cross. Churches around the globe held prayer vigils.

But the comet came and went and nothing happened. No one got sick. No one died—except England’s King Edward VII. This led to superstitious Britons connecting the two events for generations. Later, few of these crooks were held to account for their fraud, and it was discovered that the anti-comet pills were merely quinine and sugar.

In my latest novel, Devyn’s Dilemma, Devyn and the Bourne family live through these events, buying a telescope and viewing Halley’s Comet for themselves.